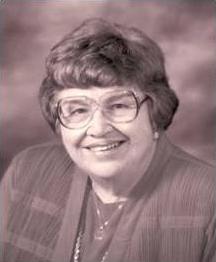 Frances Helen McClelland’s extraordinary life is remembered for her integrity, humor, generosity and strong will. She was born in Tucson, Arizona on August 4, 1923, and was the first child of W.T. and Winifred McClelland. Her Irish immigrant parents taught her the values of hard work and honesty.

At a young age, Frances was stricken with polio and didn’t have complete use of her legs. Nevertheless, she traveled the world, was a business pioneer, a philanthropist, and a community leader. She graduated from St. Joseph’s Academy in Tucson in 1940. She later graduated from the University of Arizona with an Accounting degree in 1944, and was instrumental in numerous efforts to strengthen families, which she believed was the foundation for a successful society.

In 1946, she joined her parents in the family business, Shamrock Dairy. Over the years, Frances and her brother, Norman, helped grow the family business into what is now known as Shamrock Foods Company, which operates throughout the western United States. She also was involved in a variety of post-graduation activities with the University, including serving on the Institute’s inaugural advisory board, and on the University of Arizona Foundation Board. In 2003, the University presented Frances with an Honorary Doctorate Degree of Humane Letters at University of Arizona 129th Commencement.

Frances was a philanthropist, and before she passed she set up the Emerald Foundation, which to this date has given away more than $25 Million in funds to community organizations and projects that support children, youth and families in Arizona. The Emerald Foundation has supported the Frances McClelland Institute, along with several other community organizations including the YWCA’s Frances McClelland Community Center, and the Phoenix Children’s Hospital Pediatric Frances H. McClelland Rehabilitation Center, both in which we share our name.

Frances was highly involved in her community and served as YWCA Tucson’s Board President from 1974 to 1977, and also served as Treasurer and Finance Chair. Additionally, her community involvement included the Tucson Library Board, the Amity, Inc. Board, Beta Sigma Phi., the Arizona Astronomy Board, the Phoenix Irish Cultural Center, and the Arizona Senior Academy Board.

Frances and Norman, class of 1949, also provided early seed money for the Institute, and made substantial gifts to the John and Doris Norton School of Human Ecology, and the University’s College of Agriculture and Life Sciences.

As treasurer of Shamrock Foods, Norman says Frances never forgot her family’s immigrant roots and search for freedom from religious persecution which brought the Scotch-Irish group to America.

She passed away at the age of 81 in July 2005. Her extraordinary legacy of visionary action and generous giving is still being felt today.

“We have a special bond with the College of Agriculture and Life Sciences,” says Norman McClelland. “Over the years our family and Shamrock have received the benefit of new ideas and products they have developed from cooling systems to crop genetics and disease control. Frances and I thank you.”